Blog - Latest News
You are here: Home / Business / !Houston, we have a solution

Suppose you wish to organize a big conference, with delegates from many countries, some of them can’t speak fluent English. So, you hire simultaneous translators and an acoustic booth for them to sit in and translate the lectures to those present, right?

In this case, we were Houston and the problem was that of ANSYS, a global leader in Pervasive Engineering Simulation. ANSYS has more than 75 strategic sales locations throughout the world. The company develops simulation program that enables the world’s most innovative companies deliver radically better products to their customers. So if you’ve ever seen a rocket launch, flown on an airplane, driven a car, used a computer or touched a mobile device, chances are you’ve used a product where ANSYS software played a critical role in its creation.

A couple of months ago, ANSYS turned to us. They were organizing their annual Sales Conference for their global sales and support staff in Orlando. This was the first time that the conference included a large group of delegates Asia. Therefore, they required simultaneous interpretation services for Asian languages.

Barry, director of field marketing: “The solutions ANSYS provides are very complex, and the language is mostly technical. In addition, due to the visual nature of the simulation product, the event includes many live demonstrations. We needed professional translators that will be able to cope with the terminology, and provide real-time translation to our Chinese, Korean and Japanese audience”. We also wanted the option of live streaming the event to the employees that were not on the premises. But how can we stream a live broadcast of the lectures in a language that they can understand?”

A few weeks earlier Lichi team had attended one of the world’s leading translation conferences in Amsterdam. We met there a Swiss company that developed a platform designed for broadcasting live remote simultaneous interpreting.

What does it mean? It means that Wang sits in his comfortable home in the suburb of Shanghai with his computer or his smart-phone. He enters the website of the event, and after logging-in he can select the Chinese language translation channel (one of several languages available) and watch the speaker while hearing the translation in real time in his own language, as if he attended the lecture.

So now we had a request from a client and we had the technology that fits like a glove and is the perfect solution. Since the conference was only a few months away we had to work hard and prepare, as this was an entirely new project and we did not yet know what will happen in real time. Not a simple challenge.

Technical tests were conducted to ensure that the technical issues were in order between the customer and the platform supplier. Following, it was our job to find interpreters that will integrate into something innovative that most chances are that they never had the opportunity to experience before.  At first, it seemed like a simple task – the interpreters sit in their homes, wearing slippers, anywhere around the globe without restriction.

But when we started the recruitment process, it turned out that it was much more complicated than we thought: the interpreter living in Tokyo had to get up at 3:00 am in order to translate a lecture that took place in the US at noon, and she really did not feel like doing it. The Chinese translator had to purchase equipment that will be suitable for the system, so he decided he had more important things to do, and the Korean translator did not really feel like testing the system while her baby was screaming in the other room. And there were many who declined the offer as they were not ready to face the unknown.

But Lichi Translations is not a company that will give up so fast.

As always in times of crisis, we searched a solution, and we went on a (virtual) journey around the world in order to find the best team of remote interpreters we could find for the event. After all we are talking about a revolution, aren’t we? 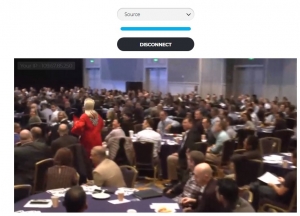 Wang stretched a little, watched the shining Shanghai lights reflecting on his window. He sipped his green tea and entered the application. On the screen appeared a lecture he was especially interested in, the interface was user friendly, so all he had to do was to select the language, click the OK button, and within seconds he could hear through his earphones the voice of Li, the Chinese interpreter who sat in front of her computer in her small apartment in Kunming and in great concentration helped to bring the words of the American lecturer speaking in Orlando to Wang’s ears. 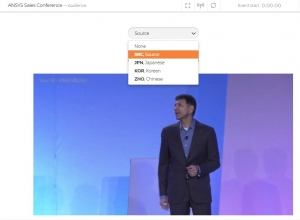 What language do you choose to listen to ANSYS CEO?

At the same time, on the second floor of her home, the CEO of a small Israeli agency listened carefully, a bit nervous and a little anxious, to the voices. “It works”, she smiled, “It works”.

And what did Barry Christenson, ANSYS director of field marketing have to say:

“Out of the seven companies we reached out to, Lichi was the only one that listened to our needs and did everything to find the right solution for ANSYS, and not the easiest one. They were able to find the technological platform, and worked with the platform suppliers to provide us the perfect solution we were looking for.

Both companies – Lichi and the platform supplier, worked with us across time-zones, and were attentive 24/7.  They were able to do multiple tests and figure the technical issues as well as the staffing ones smoothly”

“The event went great, and the attendees were happy with the translation. 1000 people attended the event that was live streamed globally. For the first time we were able to enable all our employees to participate – including those living in Asia”

A fly on the wall