Blog - Latest News
You are here: Home / Business / Back to Beida

Where were you 27 years ago?

Most of us lead a very hectic life, so it’s a little bit hard to remember how our lives looked like in the past. Military service, academic studies, weddings, our first-born child, a lot of water has gone under the bridge…

But I clearly remember where I was and what I did 27 years ago because it was, no doubt, one of the most significant times in my life, in one of the most beautiful and unique places I have ever been to – Beijing university.

When you think about communist China (at that time) and about a university, it is easy to imagine a very strict place. Intimidating concrete buildings and broad courts filled with students arranged in lines, waiting for an older professor, considered to be God’s deputy, to speak. Not really. Imagine tranquil pathways surrounded by vegetation, filled with cyclists. Picture a lake in which ducks are swimming and an ancient Chinese pagoda on the other bank. The perfect pastoral image.

This is where I was in 1992, a young student of Chinese, a graduate of the Department of Asian Studies at the Hebrew University, who just received a scholarship at the most prestigious, highly-esteemed university in China. And this is where I found myself once again, 27 years later, as part of a business trip – you could call it a journey – to tighten relationships and make new ones with the business community in the country in which I started my professional career as an interpreter, and later on, a manager of a translation company.

Telling you how much China has changed throughout the years would sound like a worn-out story and any description would only be an understatement of everything that has really taken place since the last time I set foot in there. Beijing today is very different from the Beijing I used to know. I remember tens of thousands of bicycles and almost no cars on the wide roads and a single branch of McDonald’s that attracted young Chinese who came to witness and taste the western wonder as well as some hungry foreigners who had had enough with stir-fried dishes. Capitalism has turned Beijing into a vibrant, impressive city, and everything looks like a big shopping frenzy. In Beijing, you can find everything you wished for and some more. Made in China. But, surprisingly, I did not see any wallets and credit cards in Beijing – everything is paid for by scanning a code through the WeChat App, which is the main channel of communication amongst the Chinese nowadays. As a foreigner who does not own a Chinese bank account I was amongst the few people who still hanged around with cash.

What hasn’t changed much and remained more or less the same, is the University of Beijing, or “Beida” as the locals call it.

The broad lake at the heart of the campus is still tranquil and peaceful and hosts dozens of ducks overlooking the high pagoda hiding behind the thick vegetation. Bicycles are still the main means of transportation used by the students who ride them along pathways and the ancient bridges above the water canals. The foreign students’ dorms, where I used to live, still look the same, as if not affected by time. 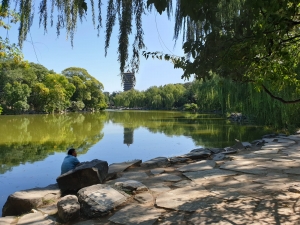 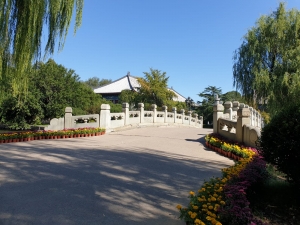 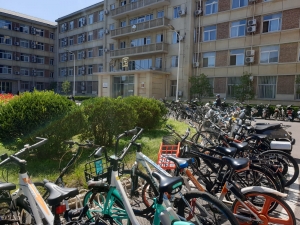 We can imagine an Israeli studying Chinese, but a Chinese studying Hebrew??

When I told people I was starting to study Chinese at the Hebrew University, most of them raised an eyebrow. At the time, there were no diplomatic or business relations between China and Israel, and China was perceived as a remote world, a communist bubble, cut-off from the rest of the world. My desire to learn the language had nothing to do with business considerations. I was just curious, and I wanted to learn a totally different language from everything I knew and become familiar with such an impressive culture. Today everything is different. China is on its way to become the biggest economy of the world and so speaking Chinese and being familiar with Chinese culture are major advantages, even though so many Chinese speak and write English nowadays.

But why would a Chinese want to learn Hebrew? When I studied at the Hebrew University, I met Wang, who made the opposite journey to mine Wang studied Hebrew at the Hebrew University!! Why exactly did he do it? It is not quite clear to me even today. It seems that at the time Chinese students were allowed to learn certain foreign languages but the options, if any, were quite limited. The first time I met Wang was when he studied Hebrew in Jerusalem in 1989. And of course we got in touch again when I arrived in Chine in 1992. Wang spent 8 years in Israel and had several jobs. He worked with foreign workers, ran restaurants.) and translated. He worked with us for a while as a translator until we lost touch, but recently, we re-connected just before my trip to Beijing. So naturally, Wang escorted me during my visit to Beijing University, a visit pleasantly conducted in (almost fluent) Hebrew. I learned that he had been a very productive translator and, throughout the years, translated Hebrew literary works such as the works of noble prize laureate Y. Agnon and David Grossman. Thank you, Wang, for the long-lasting friendship. You are definitely someone to run with, even if our tracks are so distant from each other. 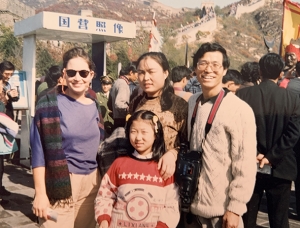 I am not sure you know, but Itzik is not a very typical Chinese name.

I met Itzik for the first time during this visit. A young Chinese guy who speaks fluent Hebrew, with almost no accent. Itzik, whose Chinese name I did not bother to find out, made a parallel journey to mine: He studied Hebrew at a Chinese university and then continued his studies in Israel for a year. When he was about to decide what to study, he decided to focus on two possibilities – and to choose between Hebrew and Nepali. Itzik’s grandfather, who was probably a wise Chinese old man, had probably told him: “My dear grandson, the Jews are the people of the book, a very ancient, wise, nation, if you learn their language, perhaps you’ll become as wise.”

Today, Itzik runs the Israeli radio channel in Beijing, produces videos on China in Hebrew and has hundreds of thousands of followers. I really hope that the special dinner we shared, with its numerous flavors, is just the beginning of a wonderful friendship.

During my visit to Beijing, I met many fascinating people and made precious personal and business contacts, but, more importantly, this trip was a little bit like coming home, to more naive days, and it was a magical combination of discovering a new China and reveling in memories of the old one. Zai Jian Beida*, till we meet again.

*So long, University of Beijing.