Blog - Latest News
You are here: Home / general / An Introduction to Spoken Dothraki

Ok. It’s official now: I’m hooked. I have been watching “Games of Thrones”

It is safe to assume that I am not the only one who uses these Covid-19 times to catch up, big time, on some quality TV binging.

A few months ago, while I was attending Elia translation conference in Dubrovnik, Croatia, I arrived at an ancient fortress overlooking a beautiful bay. The site was packed with people and many tourists were taking their pictures with the fortress in the background with enthusiasm that went beyond what one might expect on a visit to a “regular” tourist site.

“You don’t understand”, the visitors explained, “this bay was used in the shootings of the Battle of Blackwater Bay”. What the hell were they talking about? I asked myself. I knew that a parallel universe called “Game of Thrones” existed, but I never imagined that I too would be sucked into it, and with such intensity. 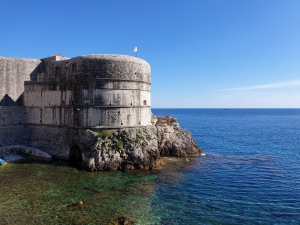 It was not simple. My son Tom and my husband Ronnie had already finished watching the series and know almost every twist and turn in the convoluted plots that make up this monumental creation. Ronnie lurks around the house and occasionally glimpses at the screen with a sly smile on his face, as if to say: Oh, you have no idea what fate has in store for Jaimie Lannister in the next episode… No spoilers, Ronnie, or you shall suffer the consequences!

And like the metaphorical winter that is a constant threat over the characters cavorting across the screen while chopping each other’s limbs off, I too dropped into the couch with my full weight, unable to tear myself away from the musings of diminutive Tyrion, the piercing gaze of John Snow, the uncompromising relentlessness of Arya Stark, the sadistic pranks of Joffrey, the scheming of Petyr Baelish, and the venomous evil dripping out of every word emerging from Cersei’s mouth. Just like everyone else, my heart too was taken by the silvery haired, warrior spirited heroine Daenerys Targaryen, known also by her royal title – Khaleesi.

In one of the brilliant scenes which drew my attention, especially as the manager of a translation company, the delicate-looking Khaleesi carries out a tough negotiation with a slave trader, a despicable creature, who refers to her person and her femininity with blatant contempt he does not even bother to disguise. The slave trader, who speaks Valyrian, utilizes an interpreter who is constrained to elegantly and cunningly filter out the foul language of the slave trader and pass along the essence of his words in a way that is both precise and polite. This is an excellent illustration of the dilemma the interpreter faces – should every single word be translated, as is required, or should discretion be exercised in order to avoid embarrassment in cases where diplomacy might be beneficial.

What also drew my heart to Khaleesi, aside from being a powerful and determined woman in a world of violent and chauvinist men, is her impressive mastery of non-English languages.

Khaleesi, who was forcibly married off to the King of the Dothraki – a nation of ferocious steppe warriors, speaks their tongue fluently after only an episode and a half, including profanities and slang. Later, we, the viewers, are astounded to discover that Khaleesi also speaks fluent Valyrian – an ancient language that is spoken only in a few backward regions of the kingdom.

So how did they do it? How did “Games of Thrones” manages to create fictional languages which sound like real languages, with consistent and reasoned grammar rather than mere gibberish?

Back in 2007, David Peterson was merely 30 years old, a graduate from the Faculty of Philology in the University of California, when he ran into a contest to create a new language held on behalf of the Association for Language Creation. Yes, yes, in the United States of America there are associations for every conceivable topic and issue. The contest was held for the HBO Production Company, which in those days was laboring to create a new and relatively large series, and the rest is history…

Peterson labored day and night and eventually send a 180 page proposal accompanied by a dictionary and audio files. Shortly thereafter he received the response that changed his life. If Eliezer Ben Yehuda is the father of the Hebrew Language, then David Peterson is indisputably the father of the Dothraki and Valyrian Languages. Perhaps one day a street in “King’s Landing” will be named after him, not far from Dizzengof.

As soon as he took the project upon himself, Peterson created the Dothraki language from scratch over several months. The rules of the language include consonants, a complex order of subject and object, and over 4,000 words which he invented himself. From these elements Peterson also invented the ancient Valyrian language, which served the ancestors of Daenerys Targaryen, and spoken Valyrian, which is common in the cities of Slaver Bay. Peterson was inspired by the descriptions of George Martin, the author whose “A Song of Ice and Fire” series are the basis of the series. He was also influenced by languages such as Russian, Turkish, Estonian and Swahili.

Of course, admirers of the series can learn fluent Dothraki by purchasing a book or downloading a dedicated Dothraki learning application, and they do indeed do this, and never cease challenging Peterson on his blog.

So, as a service to my clients, here is a brief conversation manual in Dothraki, just in case you run into a temperamental, scythe armed Dothraki warrior, or a silvery haired young woman with royal ambitions:

Hash yer dothrae chek? – How are you?

Hash yer vasti haz save, hash anha varraggak yera ma lekhoon zhorre yeroon – say that again, and I will choke you with your own tongue

So no, I do not intend to add to our repertoire of services translation to Dothraki and Valyrian. After all, “Game of Thrones” is history for most of us. But for me – so long as John Snow is shivering in the snow before the band of white walkers and Tyrion continues to swallow insults regarding his height with a smile – this series is life itself and I have no intention of budging from the screen until the eighth season ends, whether the ending is happy or bitter. And consider yourself warned – no spoilers!

We have a solution for the Corona Virus!
Scroll to top
סגירת נגישות
cancel accessibility
Provided by: