Blog - Latest News
You are here: Home / General / A few thoughts about the world cup 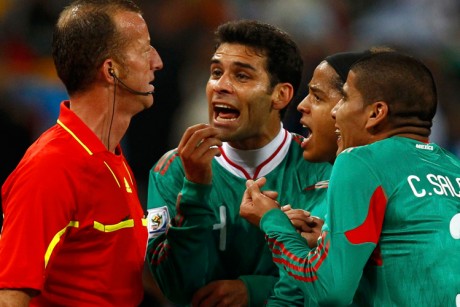 It’s not easy to be a woman these days.

The vast majority of men, throughout the world, are glued to a screen watching with boundless enthusiasm, while munching on snacks, as an Iranian footballer does his best to knock a Nigerian footballer down to the grass. The easiest thing to do is to simply get upset, to yell something like, “You men and your stupid football!” or escape for a month to friends who moved to Gobi Desert (as if they don’t have television there). On the other hand, you could try to implement the saying, “If you can’t beat them, JOIN them”, and find something in this hysteric event that could also interest a woman like me, who doesn’t know the difference between a penalty and an offside.

It’s hard to ignore the fact that the World Cup is a summit meeting between diverse cultures and languages,. You can find pale Dutch fans drinking beer with Algerian fans while a player from Cameroon swaps shirts (ugh, with all that sweat!) at the conclusion of the game with a Brazilian star who, until then, he had only seen on TV. This amazing bonding, between worlds that are so different, reminds me of only one similar event – the Olympic Games, which I was fortunate enough to attend personally, two years ago, in London. This mixture of diverse people and diverse languages simply fascinates me, like some kind of modern-day Tower of Babel.

When I began to join the men in my life –Ronnie, my husband and Tom my firstborn son, and watch part of the games (let’s not get carried away, okay? 90 minutes of this stuff could cause me brain damage), I discovered a few things that I would like to share with you: .

During one of the games I watched, the commentator made an interesting remark: It’s preferable for the referee not to speak the language of the teams who are playing. In other words – in a game between Uruguay and Chile, it’s preferable to not have a Spanish-speaking referee. And why’s that? So that the players don’t talk too much with the referee during the match, or to be more precise – don’t have pointless arguments with him. (It’s also better that he doesn’t understand what some of the players think about his sexual preferences or his mother’s occupation!)

I suppose that the communication is usually in English, and since most of the players are not exactly Oxford graduates, this communication is very basic and is utilized mostly with very clear and very exaggerated body language. It’s easy to spot a player trying to tell the referee, almost wordlessly: “Me? How come me? I never touched him at all!” Hands raised in amazement… eyebrows raised… – all of these are more efficient than an interpreter standing in the middle of the field and explaining to the referee the claims of the frustrated player.

And these are the Names:

The late Arik Einstein* (one of Israel’s most popular music icons) wrote a song during the 1990 World Cup composed entirely of the names of the players participating in that tournament. Arik Einstein, who was a sort of genius in mimicking accents, expressed all the names at an incredible speed while accurately pronouncing each name.

But what do those who are not Arik Einstein do, for instance a sports commentator broadcasting a game who encounters names somewhat more complicated than Leo Messi, and there are plenty of those? In the few games that I did watch, I had the pleasure of hearing broadcasters and commentators struggling hard with names of players from the Ivory Coast and from Portugal, which they didn’t have the faintest idea how to pronounce.

As someone who has been dealing with translation for many years, I am familiar with the problem. In our profession there are numerous names, especially professional terms with which the translator must cope in real time and do serious homework in order not to cause us embarrassment. Although we ensure that all our translators are native speakers, but still, not all of them have studied nano technological engineering and thus have to make an effort to understand the material before beginning to work.

To assist the frustrated sports broadcasters, a brilliant solution was found in the form of a new Internet site known as www.namez.com where all the names of the World Cup players can be found spoken in the local accent by a native speaker. So let’s see you trying to learn how to pronounce the name of that amiable guy from Cameroun: Cedric Djeugoue.

The Elephants, The Blues and The Fiery Ones

Names of the colors of the team or the national flag:

The Red – Spain and Chile

The White and Sky-Blue – Argentine

The Elephants – The Ivory Coast

And other descriptive names:

The Fiery Ones – Croatia

… So excuse me while I’ll join the two Fiery Ones living at home with me. Move over, guys, I’m starting to get hooked!

would love you to share your world cup experiences with me.

* Arik Einstein is widely regarded as one of Israel’s most popular music icons. His music career began in the late 1950s when he was drafted into the IDF and joined one of the musical troupes. After his military service Arik continued his amazing musical career, spanning six decades as a soloist and in various groups with many other leading musicians. From the 1980s, Einstein who was already regarded as an elder statesman of popular music in Israel, decide to refrain from public performances and concentrated on studio recordings. An avid sports fan, Arik in his youth was a junior high jump champion. In November 2013 a fatal aortic aneurism stilled the beloved voice of Israeli music at the age of 74.

How to order 3 glasses of whisky in German